Skip to content
Home Plants How To Prune Pink Calathea

Calathea Ornata (Pink Calathea) is a beautiful house plant that will surely add an exotic touch to your home or office. The plant’s main decorative feature is the foliage – dark green with light-green to white lines, irregular pink areas, and deep purplish, pinkish or red undersides.

Plant pruning is the removal or volume decrease of certain plant parts. The parts are removed or reduced for various reasons – to enhance growth and production or eliminate parts that are sick, unsightly, or otherwise spoil the aesthetics or the health of the plant.

Some plants practically require pruning to develop optimally (think orchard trees). Others require pruning only if they get into trouble (i.e., to cut off the diseased parts), or just occasional “hygienic” or beauty pruning to remove the dead leaves or other segments.

Calatheas fall into the last category.

Pink Calathea doesn’t benefit from trimming its healthy growth. Pruning the healthy leaves won’t make the plant grow more vigorously and there is nothing useful you can do with the cut-off parts because no species of Calathea can be reproduced by cuttings.

The only valid reason to prune Calathea Ornata is to remove its dead leaves for aesthetic reasons.

However, that reason may be quite a prevalent one. Calatheas are sensitive and fussy regarding nearly all growing conditions – humidity, soil moisture, lighting, and water quality. That means that whenever a Pink Calathea is outside of its comfort zone, unfortunately, it will show in on its leaves.

Note that the plant doesn’t care if it still has its dead leaves or not (it’s not like it can view itself in the mirror). Although this is really common sense, I’d like to emphasize it so that Calathea owners wouldn’t stress if they’ve pruned their plants “in time.”

The main benefit of Pink Calathea dead foliage trimming is that the plant will look pretty and fresh.

Leaf dieoff is a natural process in evergreen plants – including Calatheas. So even if your Pink Calathea is healthy and not troubled by the problems listed above, some leaves are bound to turn brown over time.

However, like many other tropical plants grown for lush foliage, Calatheas won’t drop their leaves easily. Instead, they usually continue clinging to the plant despite being entirely scorched.

As said before, the plant is not bugged by the accumulation of dead leaves, but the plant owner may be bothered! Due to the constant presence of brown dead leaves, the plant can look unhealthy and even dying, bringing a bad vibe to the room instead of a refreshment.

Cutting off these dead leaves makes the plant much more aesthetically pleasing.

If you have a partially browned or scorched leaf that is otherwise healthy but has sustained particular damage, you can carefully snip off only the brown parts of the leaf using small pair of scissors. It will likely look fresher and neater after the intervention.

However, sometimes the leaf has just past its prime. Feel free to remove it, as its loss will make room for new, desirable leaf growth and possibly even trigger it.

Like any other plant, a Pink Calathea won’t be bothered by trimming off a fully dead leaf since you are not cutting into any living tissue.

However, any sort of invasive intervention on a plant that includes a pair of sharp shears means a potential accidental injury to the plant.

Be careful when and how you use your shears – don’t do it when you’re tired, stressed, or in an altered state of mind.

Another risk is pruning all the leaves that look old and ragged, leading to the removal of too much foliage. Remember that plants need foliage in order to make food through the process of photosynthesis. Do not remove more than ⅓ of the living foliage in one trimming session.

When to prune Pink Calathea

You should prune your Pink Calathea during dormancy or at the beginning of the new growing season. That means during the wintertime, or in the early spring at the latest.

Of course, you don’t have to look at yellowed or browned leaves until the wintertime. You can cut off dead or dying leaves at any time of the year.

How to Prune Pink Calathea

To do a good job, you need a proper set of tools. Calatheas have thin but slightly tough stems, so the best-suited tools for pruning would be small, sharps scissors or snips specialized for plant trimming. The best option would be an elongated model – with longer tips and handles to help you reach between the packed stems and get precisely the leaf you want.

Here is how to give your Calateha a proper trim:

In cases of extreme damage to the leaves (cats or dogs, anyone?), a healthy Pink Calathea plant can be cut back completely during the dormancy period (winter). However, the move is somewhat risky – I would instead opt for gradually removing damaged leaves over a longer time.

Also, some cultivars may not grow back true – you may lose the desired color patterns by cutting back.

When not to prune Pink Calathea?

Avoid removing living leaves from your Pink Calathea during late spring, summer, or autumn since the plant is likely actively growing during these seasons.

Other maintenance things to consider

When you are done trimming your plant, make sure to think about the causes of any wilted or browned leaves. Is the plant getting too little or too much (direct) light? Are you watering it properly? Are humidity levels in check?

Although Pink Calathea or Calathea Ornata doesn’t need regular pruning, it will benefit from occasional trimming. Feel free to snip away the dead or damaged leaves while making sure not to remove more than one-third of the living foliage. Also, you can also snip off dry edges of individual leaves to make them look better and healthier-

By doing this type of maintenance pruning, you will not only make your Calathea more aesthetically pleasing, but also make room for new, healthy growth and decrease chance of disease. 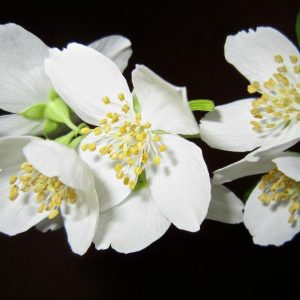 How to Care for Madagascar Jasmine

There are many reasons we love plants. Besides their aesthetic appeal, they add freshness to your living space. Additionally, plants may be beneficial to mental health and… 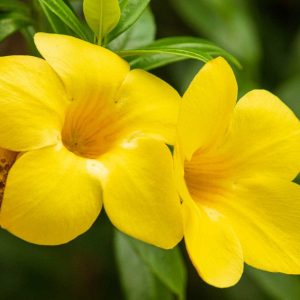 How to Care for Golden Trumpet

The golden trumpet (Allamanda cathartica) is a flowering plant you’ll commonly see in tropical locations. They are used as landscape decorations in various locations because they have…

How to Care for Confederate Jasmine

Trachelospermum jasminoides, commonly known as Confederate Jasmine or Star Jasmine (because of its star-looking flowers), is a flowering plant. When you first heard the name, it’s possible… 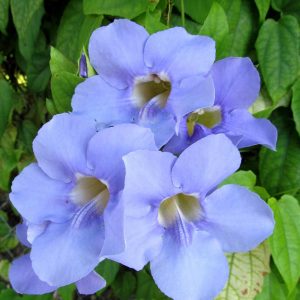 How To Care For Blue Sky Vine

If you are fond of gardening, you love greenery and the colorful view around you. You probably struggle to gather the best flowers and plant species that…

How to Care For Bleeding Heart Vine

The bleeding heart vine got its name because of its shape and colors. It has red flowers and white petals. You can usually find this plant in…

Buying a Bonsai is the perfect way to make your home greener and more decorative. Whether as a gift or a hobby, these miniature trees can bring…